Recently, Jim Collins, #1 bestselling author of Good to Great, talked to Inc. magazine on their podcast “What I Know” about meeting Steve Jobs and how he was a different leader when he came back to work for Apple a second time.

The difference, said Collins, was, “(Jobs) never lost the passion for what he was doing, and he was growing and he was learning.”

That learning contributed to what Collins called “Steve Jobs 2.0.” In his time away from Apple, Jobs elevated himself to a “Level 5” leader, exemplifying a concept Collins talks about in Good to Great. “It’s not about just being a genius with a thousand helpers, it’s about creating a culture of genius that ultimately doesn’t need the genius.”

“Level 5” refers to the highest level in a hierarchy of executive capabilities that Collins and his team identified during robust research of good and great companies. Leaders at the other four levels in the hierarchy can produce high degrees of success but not enough to elevate companies from mediocrity to sustained excellence.

Although other factors are in play when a company transitions from good to great, Collins states, “Good-to-great transformations don’t happen without Level 5 leaders at the helm. They just don’t.”

Level 5 leaders are not the larger-than-life characters most of us expect. Instead these transformative leaders possess a paradoxical mixture of personal humility and professional will. “They are timid and ferocious. Shy and fearless. They are rare — and unstoppable.”

Collins believes there is a category of people who have the capacity to evolve to Level 5.

“The capability resides within them, perhaps buried or ignored, but there nonetheless. And under the right circumstances — self-reflection, conscious personal development, a mentor, a great teacher, loving parents, a significant life experience, a Level 5 boss, or any number of other factors — they begin to develop.”

Explore your capacity for Level 5 leadership by learning more about Jim Collin’s books and concepts on his website, where he includes a library of articles about leadership.

MORE ABOUT JIM COLLINS
Jim Collins is a student and teacher of what makes great companies tick, and a Socratic advisor to leaders in the business and social sectors. Having invested more than a quarter century in rigorous research, he has authored or coauthored a series of books that have sold in total more than 10 million copies worldwide. They include Beyond Entrepreneurship (and the newly released Beyond Entrepreneurship 2.0 version), written as a roadmap for entrepreneurs and leaders of small-to-mid-sized enterprises who want to build enduring great companies provides enduring great companies, Good to Great, the #1 bestseller, which examines why some companies make the leap and others don’t; the enduring classic Built to Last, which discovers why some companies remain visionary for generations; How the Mighty Fall, which delves into how once-great companies can self-destruct; and Great by Choice, which uncovers the leadership behaviors for thriving in chaos and uncertainty.

Grow and learn with our Supervisory Leadership Certificate Program, which includes a diverse course curriculum that not only includes a core course “Development Yourself and Others” but also covers other critical topics like “Coaching for Performance,” “Change Management,” “Supervision and Human Resource Functions,” “Interpersonal Communication,” “Helping Your Team Achieve Organizational Management,” along with a Capstone Course that integrates all the learning and knowledge. Now enrolling for the spring session, starting in February.

It’s a new year and now a new President. If you need inspiration for re-imagining and re-humanizing our care system, check out the Care 100 List, a first-of-its-kind list of dynamic leaders tackling the problems and opportunities of care in this country, guided by the belief that “care is fundamental to our collective thriving.”

The criteria for inclusion was:

The list is less concerned with where contributors work – encompassing start-ups, corporations, nonprofit organizations, government, education and the arts – and more interested in how they work. The list includes 10 honorees in 10 approaches to care:

Warriors – bending the moral arc of the care universe
Builders – taking ideas and making them real
Weavers – helping people connect, knowing how to make them feel “seen”
Pioneers – forging the path the rest of us are trying to walk and widen
Backers – changing the reality of care investment
Dignifiers – elevating critical care work to its rightful place in our society
Truth-Tellers – telling fresh, accurate stories about who we are and how we show up for one another
Healers – understanding that life is interwoven with loss and resilience
Educators – enlightening us on how to help and how to ask for help
Visionaries – seeing beyond the horizon to the policies, products and cultural jumpstarts that will better our common life
Read 100 stories about real change-makers, including “warriors” like Katie Bethell, founder of PL+US, a long-time champion for families with a track record of spearheading impactful policy change, who is leading a movement to make paid leave the norm, not the exception.

The Care 100 List also came up with a list of the “five most powerful ideas” that they believe will be the most durable and transformative based on the year 2020 was and the vulnerabilities exposed by coronavirus.

*
New Dates Available for Train-the-Trainer
The Wisconsin Caregiver Academy has scheduled new train-the-trainer sessions through June 2021. When taking a train-the-trainer course, employees can become state-approved trainers for assisted living providers. This eliminates the cost and burden of having to bring in outside trainers into your facility to train staff. You, an employee or a consultant can become a state-approved trainer!

See All Dates by Topic:

It is not enough to diligently and proactively hire a diverse workforce. Successful organizations ensure that they are also creating inclusive environments in which all employees feel valued, welcome, integrated and not isolated. If not, experienced talent recruiters report, new hires will self-eject from the work situation in three months to a year.

Diversity lends itself to policy, enabling an organization to clarify internally and externally. Diversity efforts at all levels of an organization can be measured and compared against the local community or larger social order, promoting multigenerational, multiracial and multibackground progress.

World populations are not static. They are moving seas of dynamic factors. In fact, in the next two decades, the United States is facing three monumental demographic turning points. These turning points will call many of us to challenge our assumptions and work harder at identifying and understanding the unique differences among people.

Inclusion is harder to quantify and requires a much more nuanced approach. Ideally, diversity and inclusion are approached separately as two distinct tenets of culture-building.

In essence, inclusion refers to a cultural and environmental feeling of “belonging.”

So, what does an inclusive environment look like? The COO at Startup Institute did something groundbreaking. They asked. Below are some of the answers their employees gave:

In addition, respondents suggested it’s more than just policy and procedure. It’s the daily actions – conscious and unconscious – that contribute to the everyday experience for employees.

Listening carefully to employees’ answers and thoughtfully laying them alongside quantitative data will often illuminate how an organization can take definable actions in aligning their culture with their mission and values.

And organizations can start today by asking the questions.

The changing racial makeup of the United States is most visible among children.

Racial and Ethnic Composition of Children Under Age 18 (In Percent) 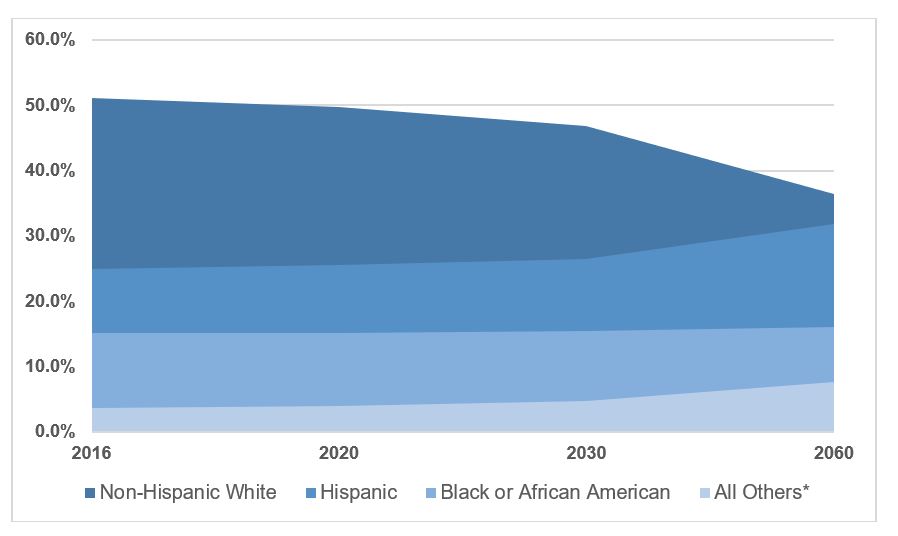 * The other race group includes children who are American Indian and Alaska Native, Native Hawaiian and Other Pacific Islander, and Two or More Races.

WHAT YOU CAN DO:

Develop a deeper understanding of diversity, equity and inclusion and ensure your business or organization reflects larger society. UW-Green Bay is now enrolling for a new Diversity, Equity and Inclusion Certificate Program, designed for HR professionals, business and government executives and leaders, managers and team leaders, parents and nonprofit and community leaders. There are two levels with the foundational level starting in February for five weeks. Learn more and register.