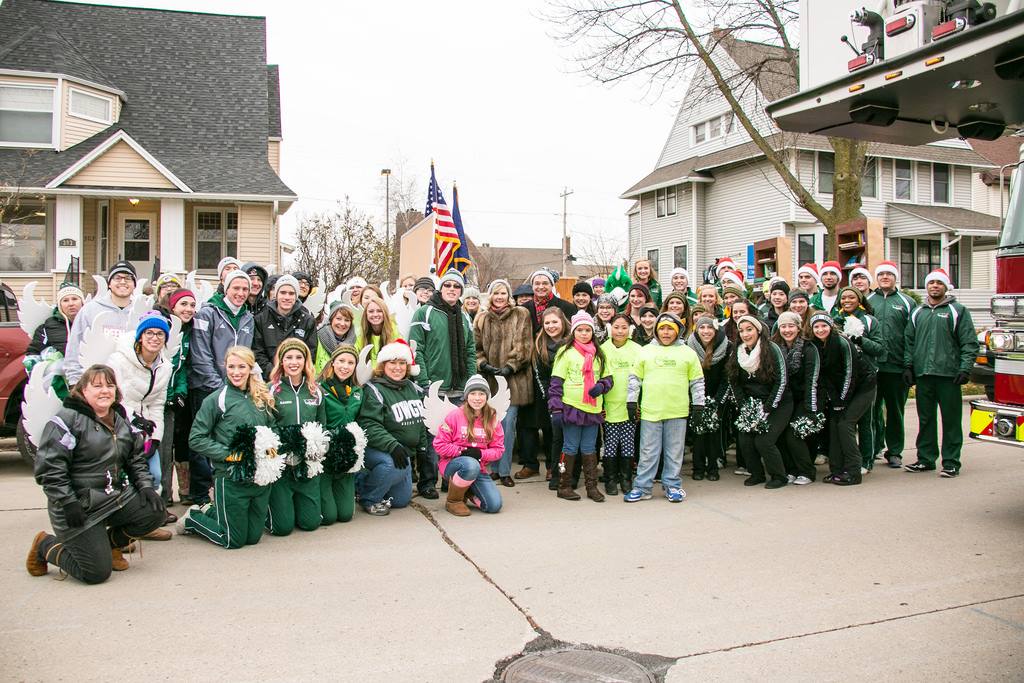 UW-Green Bay’s entry in the Downtown Green Bay Holiday Parade earned “most original” honors this year. UWGB’s small committee of determined volunteers won the Mayor’s Award for “Every time a bell rings, a Phoenix gets its wings.” The theme of the parade was “Sounds of the Season.”

In celebration of UWGB’s 50th Anniversary, UWGB Chancellor Gary Miller and Georgia Miller served as parade marshals. With help from the Dance Team of UW- Green Bay and UW-Green Bay Cheer Team, Green Bay Phoenix student-athletes, UWGB Alums, University of Wisconsin-Green Bay Phuture Phoenix and family of UWGB employees, more than 50 people marched together, handing out candy and celebrating with the projected 10,000 plus in attendance. The Parade Committee also used the float for a service opportunity, collecting hundreds of school supply donations from UWGB faculty, staff, students and administrators, and local businesses, which will be donated in the weeks ahead to students in the Green Bay public schools. UW-Green Bay’s float entry in this year’s holiday parade was fantastic for many reasons. First, the design was impressive with three life-sized Jack-in-the-Boxes. But more importantly, to represent this year’s Green Bay Holiday Parade theme, “Toyland Christmas,” the UWGB parade committee collected toys for children in need as part of the U.S. Marine Corps’ local Toys for Tots campaign. The float was filled with toys that will be donated and the community was able to see just how supportive UW-Green Bay is of our community. Even the parade judges agreed as they awarded UW-Green Bay with the Jean Nicolet Award for the float with the best parade theme portrayal! It was a great day of collaboration between students and employees and a great day for UW-Green Bay!